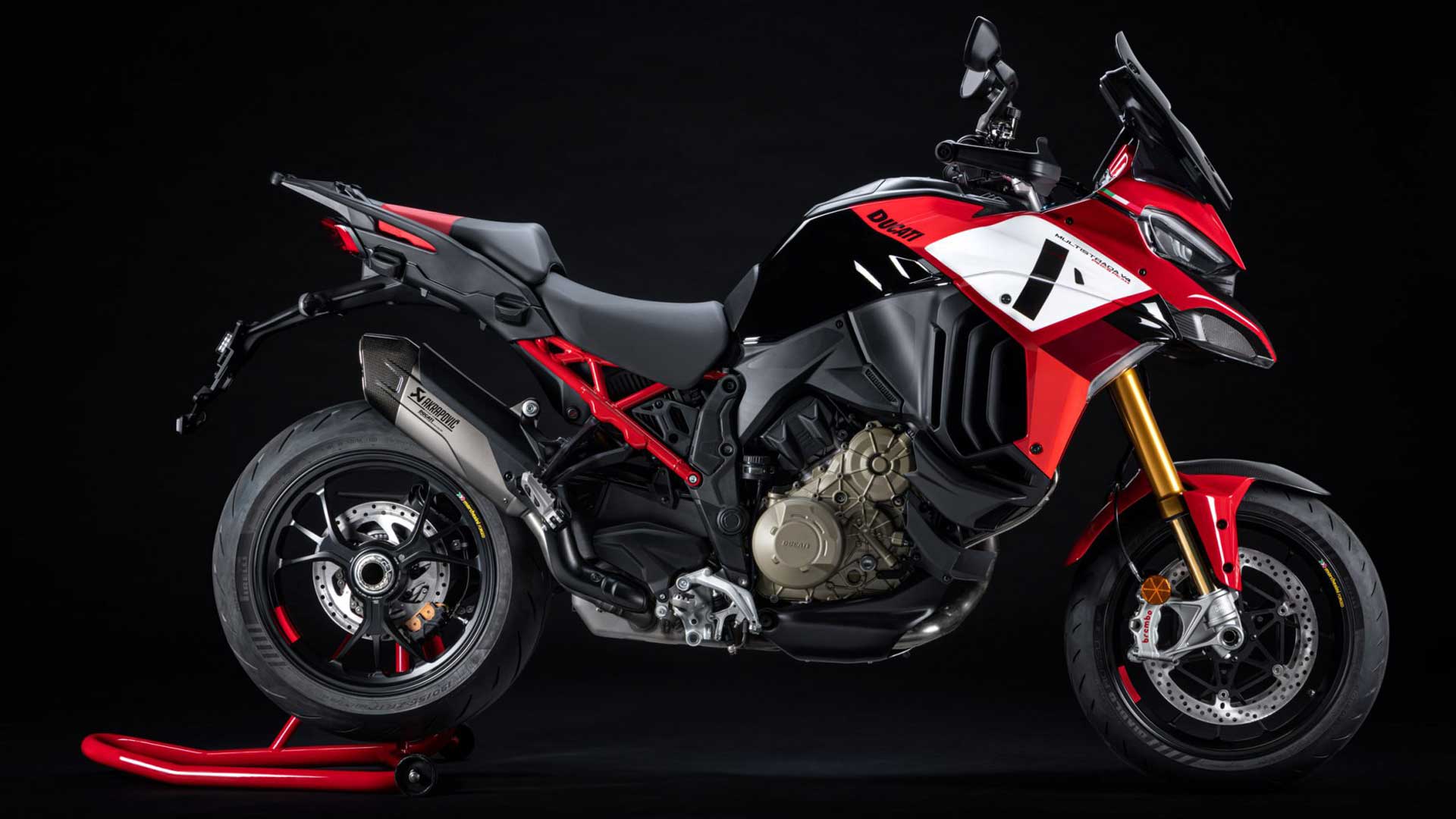 The sportiest dual in the world

When sportiness is more important to you than anything else. The Multistrada V4 Pikes Peak was developed to bring the sporty qualities of the Multistrada V4 S to the extreme: a dedicated riding position, 17" wheels with sports tyres, single-sided swingarm, Öhlins suspension and the new Race Riding Mode.

A bike that is sharp, precise and effective even on the track. The Multistrada V4 Pikes Peak is not only the sportiest Multistrada ever, it is also the most powerful model in the entire crossover segment.

Exciting and adrenalin-fuelled, it is powered by the V4 Granturismo engine, capable of delivering 170 hp at 10,500 rpm and guaranteeing high performance in sporty riding thanks to new electronic management strategies.

Sharp and responsive. Precise and adrenalin-fuelled.
In the new Multistrada Pikes Peak the alchemy between chassis, ergonomic, electronic solutions and high level componentry gives the rider the maximum expression of the racing character of the 170 HP V4 Granturismo.

The Multistrada Pikes Peak in race riding mode offers the maximum engine and chassis performance, allowing riders to fully enjoy the 170 HP of the V4 Granturismo engine and the excellence of the Öhlins Smart EC 2.0 suspension. The system exploits an even more direct throttle response in High Power Mode. Ducati Traction Control and Ducati Wheelie Control operations are reduced to a minimum and the cornering ABS is set to level 2, also allowing controlled lifting of the rear wheel and therefore getting the most out of the braking phase, even on the racetrack. The Race Riding Mode is undoubtedly the ideal choice for experienced riders who wish to exploit all the exclusive performance the Multistrada V4 Pikes Peak can offer, also on track.

170 HP V4 Granturismo engine with racing electronics strategy.
Lighter, more powerful and more reliable than the previous generation of twin-cylinder engines. With a displacement of 1158 cc, the V4 Granturismo engine ensures top-of-the-segment power and torque levels. The Euro 5-compliant engine delivers 170 hp with a maximum torque of 125 Nm at 8,750 rpm. The sporty attitude is enhanced by a racing strategy for the rev limiter and the quickshifter that allows faster gear shiftings and extremely aggressive downshifts, as well as the implementation of an even more direct throttle response in High Power Mode.

17" front wheel with forged rims and dedicated ergonomics.
The 17" front wheel combined with the adoption of lightened Marchesini aluminium forged rims results in absolute precision between curves and a high speed when reaching the apex. A revised strategy also in the main dimensions and ergonomic elements such as the footpegs and handlebar, to give the rider a more sporty feeling and is dedicated to dynamic riding on asphalt.

Single-sided swingarm and Pikes Peak livery
The stylistic elements typical of the Pikes Peak version such as the 17" front wheel and the single-sided swingarm are enhanced by the functional elements of the new Multistrada generation. A look that reaches the pinnacle of sportiness thanks to the new livery with number plates on both sides inspired by the graphics of the Desmosedici GP ‘21. The passenger seat is two-tone with the "V4" logo visible from above.

Ohlins Smart EC 2.0 suspension
The V4 Pikes Peak is the first Multistrada ever to be equipped with electronic Smart EC 2.0 Öhlins suspension. The Smart EC 2.0 system is the same adopted by both Panigale V4 S and Streetfighter V4 S. It is a particularly advanced system that allows an “event based” adjustment, according to the rider’s riding style. This technology borrowed from Ducati supersport bikes is combined for the first time with Riding Mode Race, which acts on the electronic controls to express the bike's racing potential to the full. 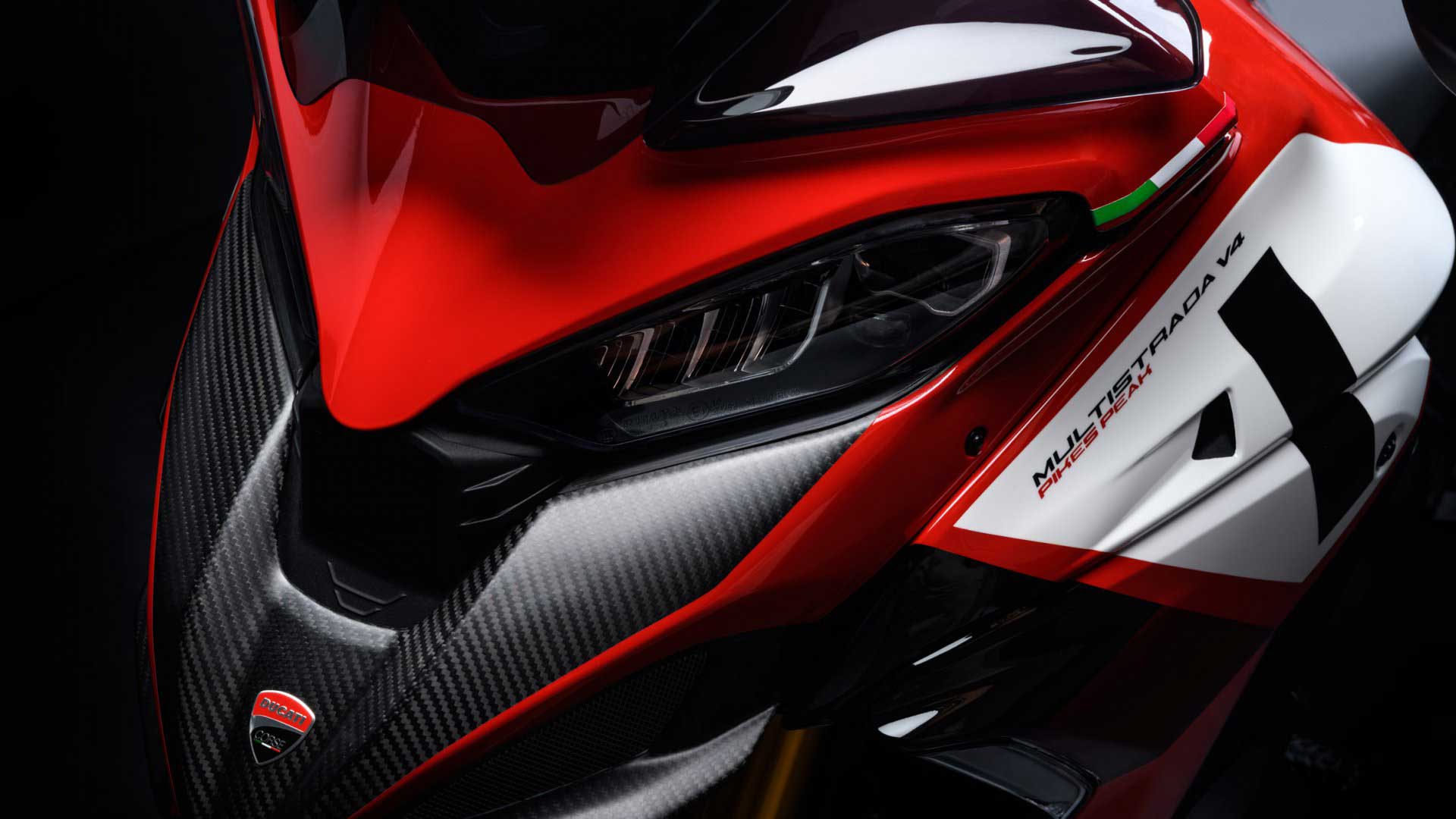 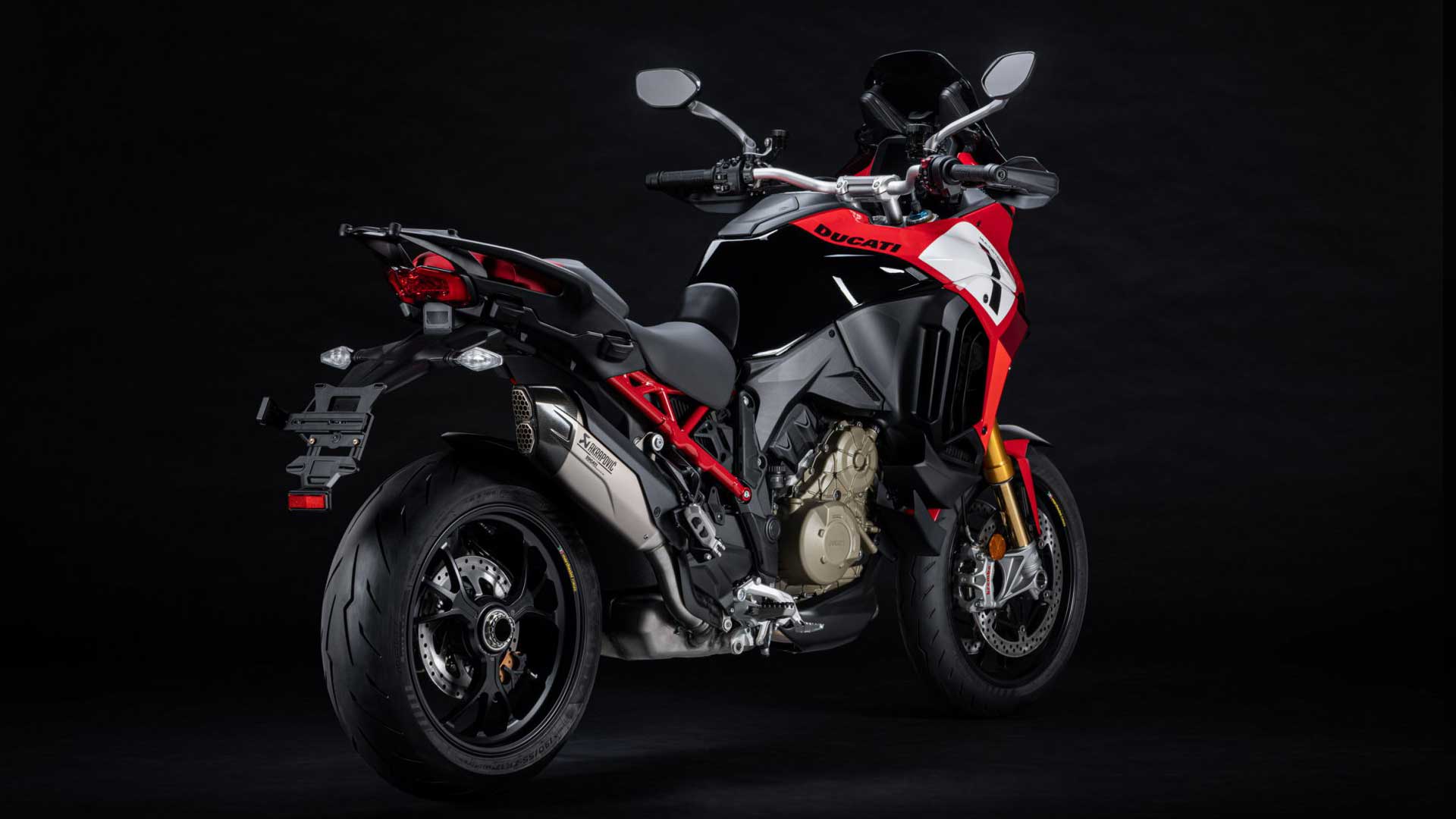 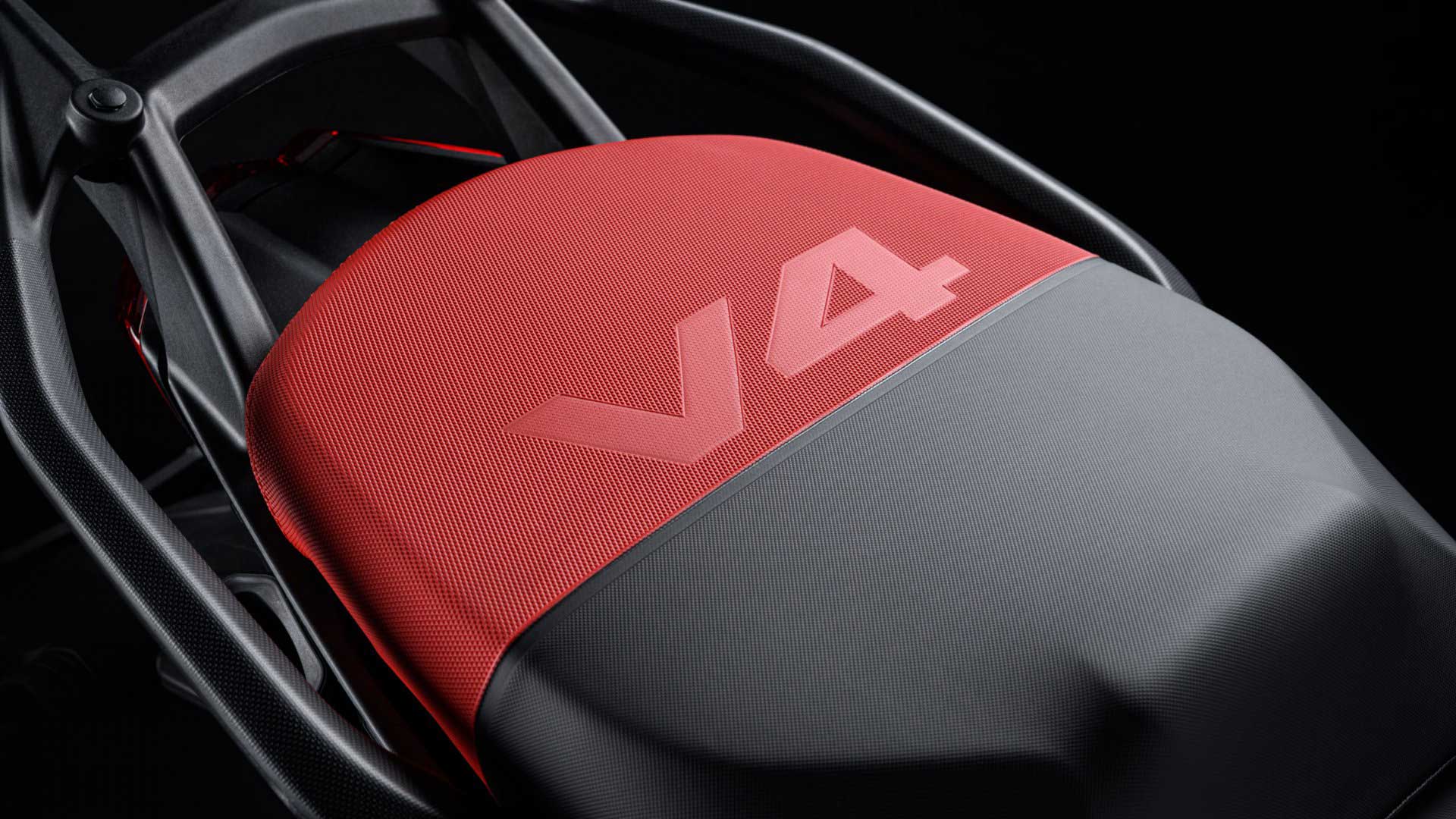 Created to satisfy the desire to travel without restrictions and boundaries, Multistrada and DesertX are ready to expand your horizons of freedom.

Ducati offers a 4-year warranty on all models of the Multistrada and DesertX family with the 4Ever Ducati warranty.

Increasingly strict and prolonged testing, improved production processes and advanced numerical simulations have enhanced the reliability of the Multistrada and desert family models to the highest level ever.

Get ready to discover the fourth Multistrada generation

The Multistrada V4 is available now from just £165.00 per month (plus deposit & optional final repayment).

Sportier and more touring, stronger in off-road use and easier in urban action. Lightweight and compact, with an 170HP V4 Granturismo engine for a sporty, exciting ride on mixed terrain. Available to test ride today.

PCP Representative Example based on Multistrada V4 in Ducati Red with an annual mileage of 4,000.

*Included in Optional Final Repayment. Credit is subject to status and is only available to UK residents aged 18 and over. This finance offer is only available through Ducati Finance which is a trading style of Black Horse Ltd, St. William House, Tresillian Terrace, Cardiff CF10 5BH. Finance offer ends 31st March 2022. The Cash Price shown above includes 1st registration fee and road fund licence. With TriOptions Personal Contract Purchase (PCP) you have the option after you have paid all of the regular monthly repayments to: (1) Return the motorcycle and not pay the Optional Final Repayment. In this example if the motorcycle has exceeded 12,333 miles, a charge of 7.2p (including VAT at 20%) will apply per excess mile. If the motorcycle is in good condition (fair wear and tear accepted) and has not exceeded 12,333 miles you will have nothing further to pay. (2) Pay the Optional Final Repayment to own the motorcycle or (3) Part exchange the motorcycle subject to settlement of your existing finance agreement; new finance agreements are subject to status. Figures are correct at time of publication and can be subject to change.